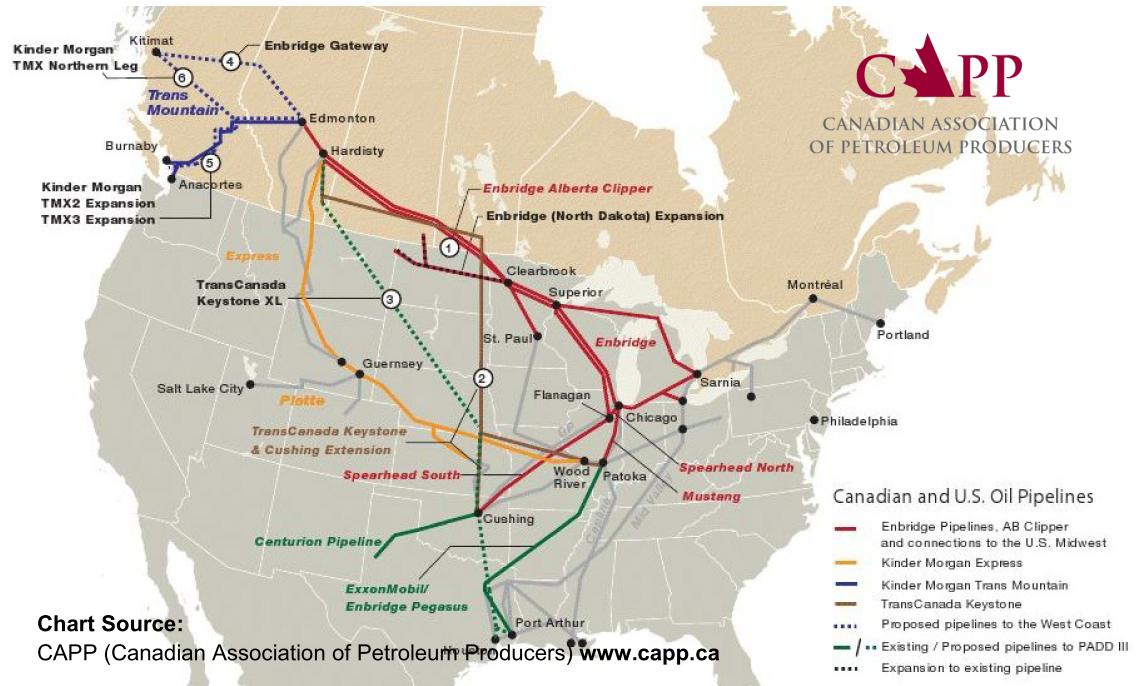 With Albertan refining capacity at less then 500,000 bopd and production averaging around 2.8 million bopd in 2012  the need for export capacity is obvious. The Canadian Association of Petroleum Producers (CAPP) is projecting that supply from Western Canada will increase to 4.85 million bopd in 2020 (from about 3.4 million bopd currently) and 6.7 million by 2030. With current pipeline take away capacity around 3.67 million bopd we will need to find other means of getting our oil to market. Currently, the rail by oil capacity is picking up, but for this post we'll focus on pipelines.

Due to refinery requirements, the market for this heavy oil is limited. With stagnant to declining light conventional production, the growth expected from Canadian oil production will be heavily weighted to the oil sands. Alberta does have some upgrading facilities that can process heavy oils into synthetic oil, this along with our conventional supply can find markets across Canada in the United States. But upgraders, and the construction of refineries with the configuration required to handle the heavy hydrocarbons contained in bitumen pose huge capital costs and are often not deemed to be economic (see Suncor's Voyageur).

Simply put, Alberta oil needs to go (1) East: to the Canadian refinery complex in Eastern Canada and/or Atlantic tide water for export to PADD I and Europe, (2) South: it is unclear how much more of our oil the Midwestern refineries can absorb, however the refinery complex on the Gulf of Mexico is a largely untapped market for our crude, and (3) West: getting oil to pacific tide water will facilitate exports to the PADD V refinery markets and of course the vast, and growing, Asian markets.

The Current State of Affairs

- Trans Canada’s Keystone (590,000 bopd): Currently Phases 1 and 2 connect Hardisty with Cushing, OK. Phase 3 which will move 400,000 bopd from Cushing to the Gulf Cost should be on line in December of this year.

- Proposed: Keystone XL (830,000 bopd): At $5.3 Billion Dollars, this pipeline will deliver oil from Hardisty to Steele City, Nebraska. From there it will tie into existing infrastucture delivering oil to Cushing and on to the Gulf Coast. Energy East Pipeline (1.1 million bopd): this $12B project would combine new pipeline construction and existing infrastructure and move 1.1 million bopd of Alberta’s oil to the Atlantic.


- KinderMorgan’s Trans Mountain (300,000 bopd): Connecting Edmonton with Burnaby. This is Canada's only access to the Pacific Coast.

- Proposed: Trans Mountain Expansion (590,000 bopd): The application for this $5.4 Billion project with the National Energy Board (NEB) later this year.


- Enbridge's Mainline (2,500,000 bopd): Enbridge's Canadian Mainline system is being expanded to increase capacity by 120,000 bopd in phase I (expected completion 2014) and by another 230,000 bopd in phase II. Flanagan South Line which should be online in 2014 and will initially move 600,000 bopd to Cushing. Enbridge is also involved in the recently reversed Seaway Pipeline project that is currently moving 150,000 bopd from Cushing to the Gulf Coast. Capacity is expected to reach over 400,000 bopd and a twinning of this pipline will add more then 400,000 bopd during 2014 of take-away capacity from Cushing to the Gulf Coast.

Proposed: Northern Gateway Pipeline (525,000 bopd): This proposed pipeline would traverse the rockies taking 525,000 bopd from Edmonton to Kitimat, BC and returning 193,000 barrels of condensate.


The only export market for Canadian crude oil is the United States. While this isn't a necessarily a bad thing (being that the US is far and away the largest crude oil importer, despite all of the 'energy independence' talk), it does limit our options. Even with the Trans Mountain expansion and the Northern Gateway pipeline that would give Albertan oil access to tide water, it's quite likely that a significant portion of this oil would find it's way down the pacific coast to PADD V refineries, as the Trans Mountain oil currently does. So lets take a look at where we'd like to get our oil. 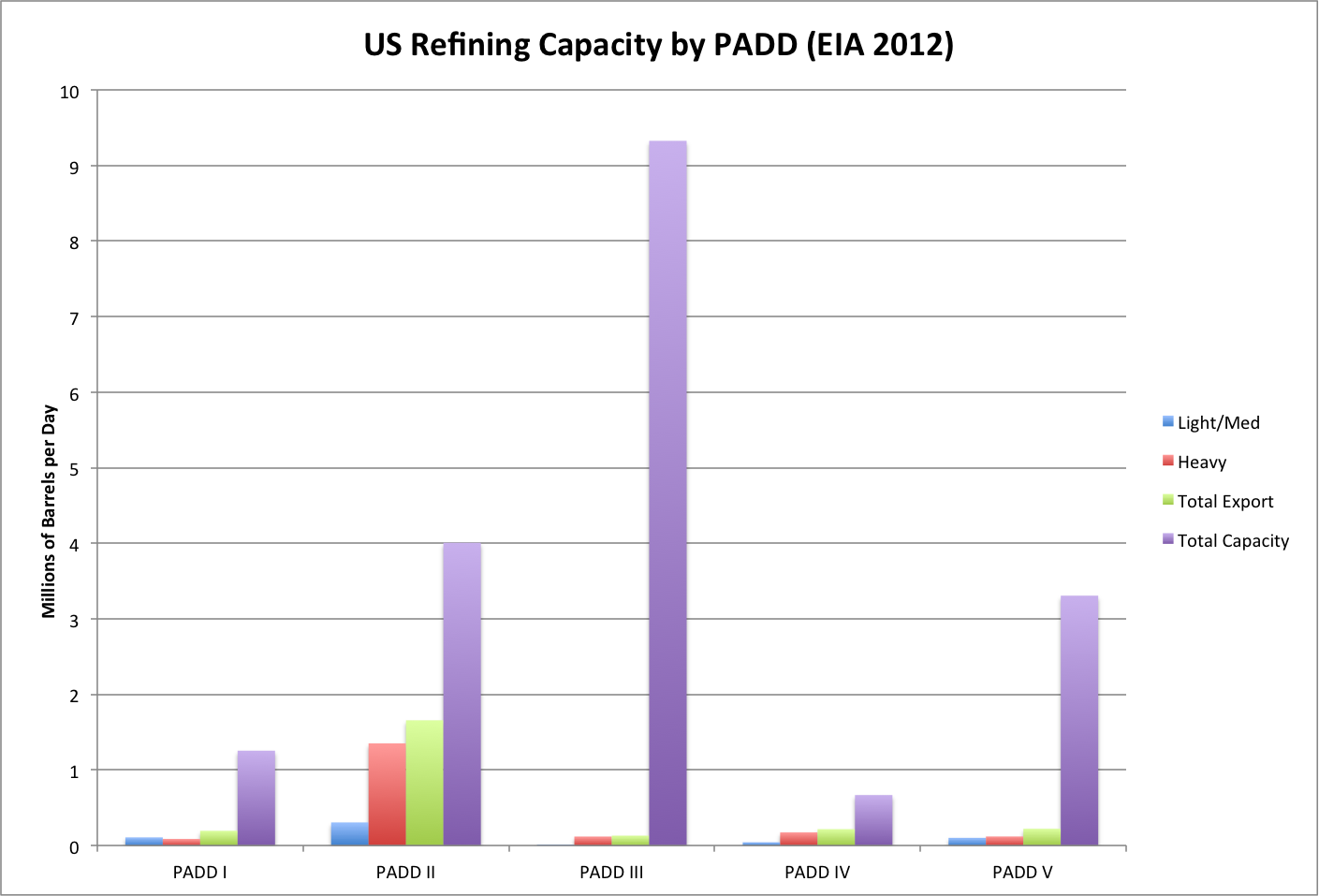 This graph is a bit noisy but we can see that the vast majority of our exports are going to PADD II where we do have significant market share. What is a bit shocking is our inability to penetrate the PADD III Gulf Refinery complex. The Keystone XL, Enbridge Expansions, and the complementary development of pipelines heading from Cushing to the Gulf Coast aim to rectify that.

The falling oil production/imports from Mexico and Venezuela that is similar in composition to the WCS that will eventually make it's way to the Gulf. Assuming the decline in imports from these countries persist then the market will find a way to get our oil down there. 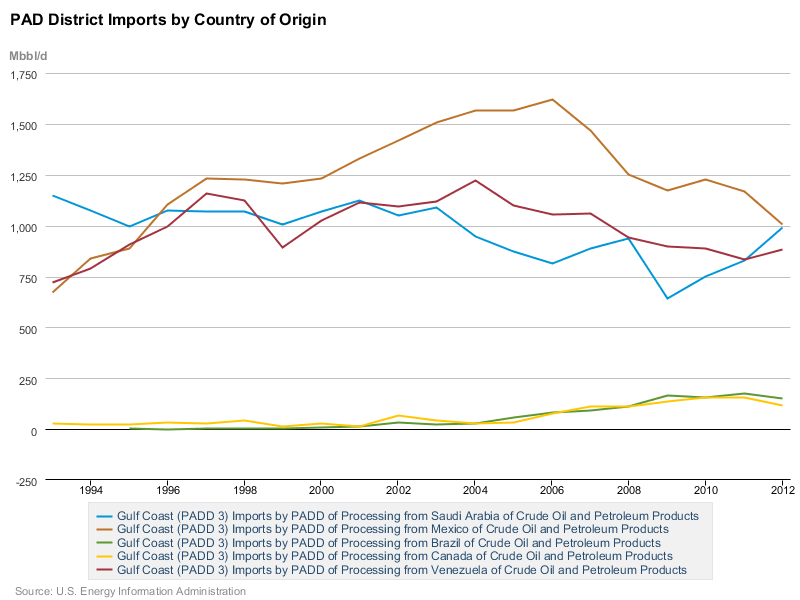 With more then 9,000,000 bopd of refining capacity, much of which is configured to handle heavy oil, and with decreasing exports of heavy oil coming out of Mexico and Venezuela, our oil and PADD III's refineries just make sense.

Taking a look at this map from the CAPP we can see that the bulk of the Canada's refining capacity is in Eastern Canada (where the bulk of the population is).  With Qubec and Atlantic Canada importing the bulk of their refinery inputs at Brent Pricing. Trans Canada's Energy East pipeline will carry 1.1 million bopd from Hardisty out to Eastern Canada offloading oil to refineries and marine export facilities from Quebec to the Maritimes. 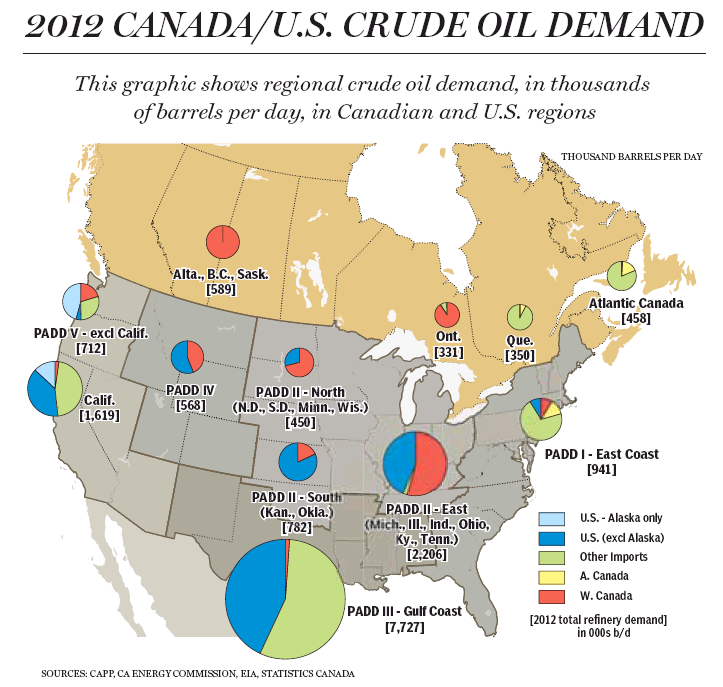 Since the Canadian Refineries are limited in their ability handle the heavy oil that will make up the growth in Alberta's production, this plan will require some investment in the Eastern Refineries to get them up to standard. It will also require that demand for Canadian oil from European refineries remains strong.

There is also offshore production potential in Atlantic Canada that would likely be the preferred feedstock for the local refineries as they are currently configured. Announcements like the recent report from Statoil remind us that as the price of oil climbs new, more expensive, harder to access resources will be found. The economics of moving alot of oil east seems to rely on Alberta's oil replacing declining regional production and expensive Brent imports. The likelihood of homegrown offset needs to be considered.


Getting oil to the West Coast allows Alberta to sell into the entire Asian Pacific market. All told, this area has the capacity to refine in excess of 20 milllion bopd. The following graph taken from a presentation by Turner, Mason & Company illustrates the size of this market: 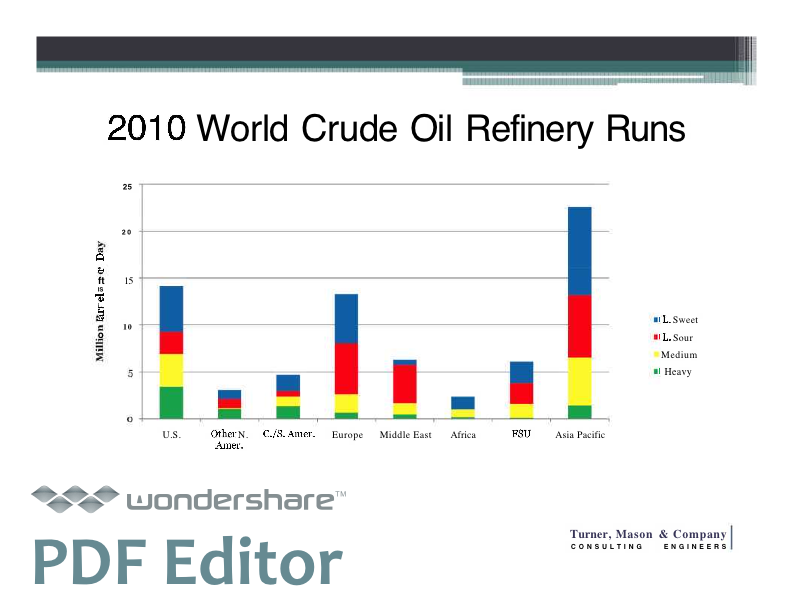 Selling into this market gives Alberta the chance to capitalize on the declining heavy oil production in California and the growing Asian markets. The PADD V refineries in California would be served first, but having the option of moving oil to Asian markets is a no brainer. 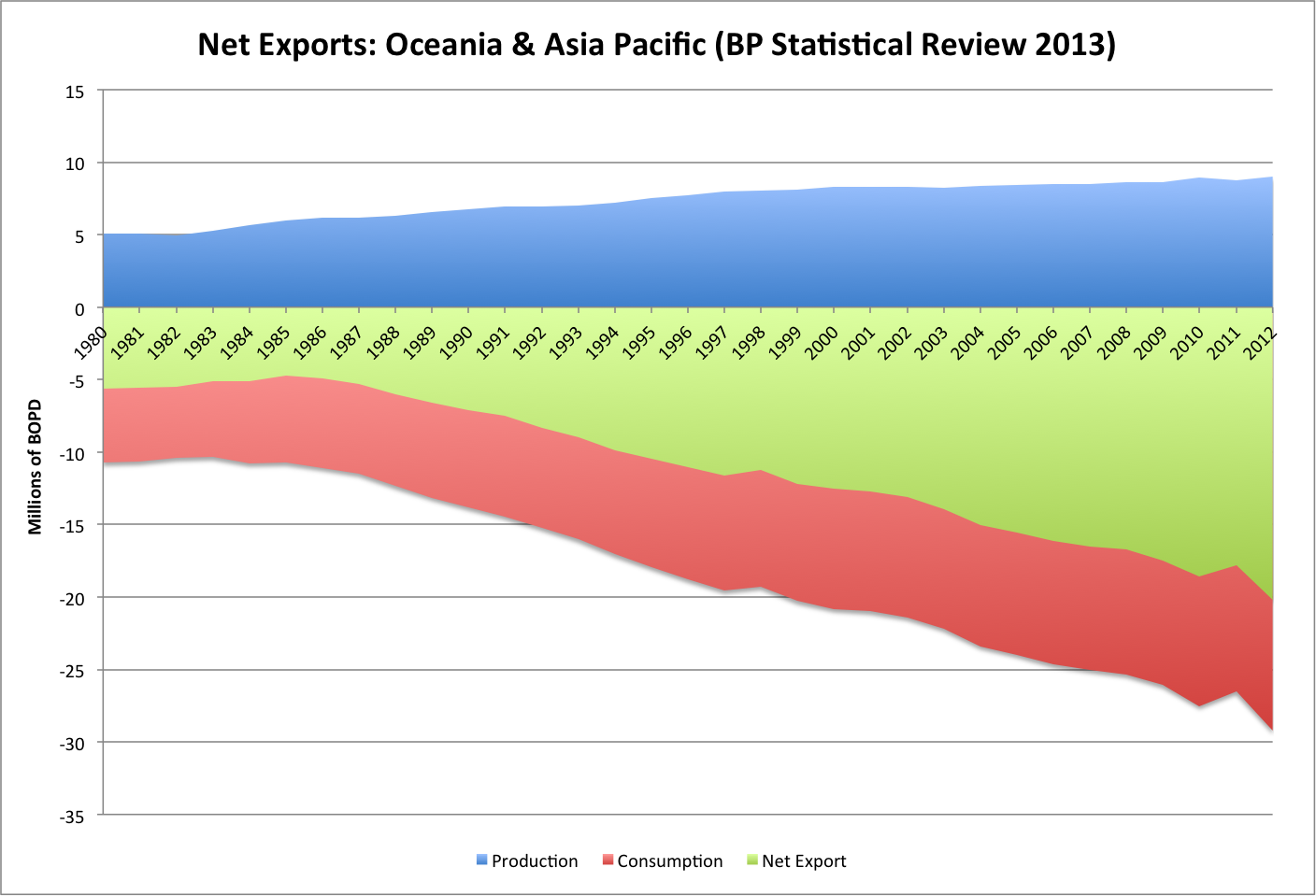 With a stagnant developed world, Asia is the driver of growth in resource consumption. While the potential for large scale unconventional finds seems to be minimal in this region, the sheer scale of the divergence between domestic production and consumption (see graph above) make it unlikely for the net export trend to reverse anytime soon.

Relative to the overall refining capacity, Asia's ability to handle WCS type heavy oil is currently minimal. I will argue in a future post that these are also the countries where the investment required to upgrade current infrastructure, or build new infrastructure to handle WCS are likely to yield the greatest benefit. Thus, future demand for WCS would likely follow belief in adequate supply. Thus, if we build it, they will buy. But can we get oil through BC?

In terms of pipelines the size, proximity, and refining infrastructure of PADD III make it the logic termination point for pipeline builds and expansion. Keystone XL requires presidential approval for the portion of the pipeline crossing the US - Canada border, but the rest of it can, and is, being built. As long as Obama signs off by 2015 the pipeline would still open around 2017, right on schedule.

That being said, if Canada had a coherent, cohesive, and long term energy strategy establishing WCS as a feedstock in the Asian markets seems like the obvious play. Oil will find it's way to PADD III by rail and domestic pipeline expansion in the event that Keystone XL permits are denied. Can we get significant oil to the Pacific without either Kinder's Expansion or Enbridge's Gateway? It remains to be seen.