How Much Oil Is Really There?

If you've ever wondered why the price of oil is so high, or why people like myself are even interested in the scarcity question when we see 2013 stories about the Wolfcamp play, or the oil in Coober Pedy, or like last year's Bazhenov shale oil play in Eastern Siberia you aren't alone. The logic would go, Saudi Arabia produces lots of oil, here are three plays with comparable amounts of oil as Saudi Arabia, therefore, we'll soon have three sources of production comparable to Saudi Arabia.

While this could be the jump off point to a number of different issues on why oil is not oil is not oil, I'm going to talk about some resource classification terms that get thrown around in the media without much dissection. When I'm unsure I usually refer back to this Society of Petroleum Engineers (SPE) document.

Oil Initially In Place (OIIP): OIIP, sometimes referred to as "total resources" or Petroleum Initially In Place (PIIP) is used to describe the total amount of oil in a reservoir. Since recovery rate varies with the viscosity of the oil (how the oil flows), permeability of the rocks (is the oil able to flow), and the drive rate (naturally or unnaturally occurring pressure that forces the oil towards the well) this number can mean next to nothing without knowing more about the geology and the type of oil to be produced.

Reserves: This is an important metric. Reserves basically entail how much of this oil we'll get to market. This should include: development over a reasonable time frame, feasible economics under reasonable assumptions, the ability to get the oil to market is reasonable, and the ability to develop the reserve from a legal perspective are adequately evaluated. Reserves are further classified into Proven Developed Producing (PDP) and Proven Undeveloped (PUD) holdings to signify what portion of the reserve has actually been produced.

Resources: Broken into contingent and prospective resources, the first refers to oil that can reasonably be expect to get to market at some point but can't right now, while the second can be reasonably assumed from other information about the trend to exist, but have yet to be discovered. There are a number of sub categories for resources but the important point is, this oil will not be getting to market as things currently stand.

Unrecoverable: This is the portion of OIIP that does not meet the previous classification standards. This is the stuff that we can't really plan around. Some portion of it may become producible as economics and/or technical circumstances change, but some may never be recovered due to physical/chemical constraints.

Estimated Ultimate Recovery (EUR): This term is also generally used to describe the cumulative total of produced oil, reserves and resources. Although I find this term to be pretty vague. Like an economics model we need to know what assumptions are required to get this number. For example an EUR without discussion of price assumptions shouldn't be taken too seriously. Of course, predicting the price of oil to generate these assumptions is a crapshoot as well. 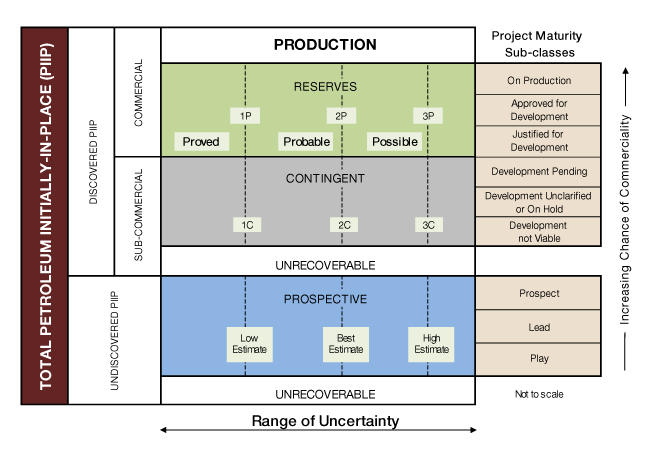 A key point is that besides OIIP these numbers are not static (OIIP estimates can change, but the actual OIIP number in theory should be static). This illustration describes where these classifications sit in the development process.

My point more simply is this: google is your friend. If you're blown away by a new oil play, find the source that the news stories are quoting and dig through the terminology and assumptions. It might help illuminate whether or not we actually have a 'game changer' on our hands.

As basic as my knowledge is on this topic, it's often enough to read through most news stories. Is it the next big find? Maybe. But I won't get to excited until investment begins to match the hype. And I'll probably remain a skeptic until the oil starts flowing.