Any speculation on the future direction of an economy will be fraught with oversimplifications, unrealistic assumptions and perhaps, straight up guesses. But when it comes to China we’re really grasping at straws. Here’s why.

“The United States and China have about the same geographic area, although China’s mountainous and desert expanses mean that it has significantly less arable land. But China’s population is about four times larger then America’s. To match the challenge of human scale that confronts China, the United States would have to bring in every person from Mexico, more then 110 million in all, plus the 200 million people in Brazil. Then it would also need the entire population of Cuba, and the rest of the Caribbean nations, plus Canada, Colombia, and every other country in North and South America. After doing all that, it would be up to around one billion people. IF it then also added the entire population of Nigeria, some 155 million, and every person from the hyper-crowded islands of Japan, 125 million more, it would have as many people as China – almost.”

When we say four times larger then America's population I think the scale still gets lost due to the size of the American population which is the third largest in the world with over 80 million people more then the fourth most populous Indonesia. Here, the same sentiment is presented visually by grouping countries in comparable population blocks as China from the people at @Amazing_Maps on twitter: 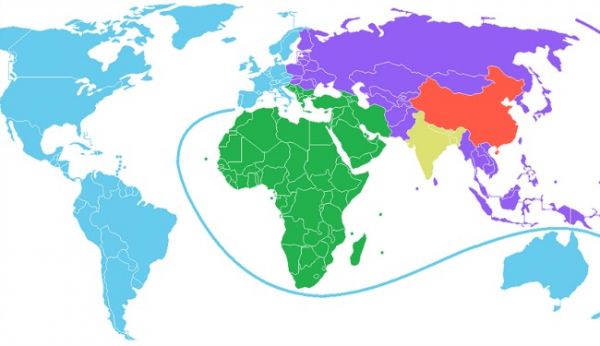 Another factor that makes thinking about China difficult is that it started this amazing development march from extremely low levels. Low levels of infrastructure, market structure, institutions, financial systems, etc.

The speed of Economic development has varied across these many different factors and infrastructure has certainly led the way. The constant discussion about China's need to "rebalance" growth away from Investment and into Consumption alludes to China's appetite for large scale infrastructure development. We can see on the map above that the only country that comes close to China's population weight is India (equaling Chinese population with the additions of Bhutan, Bangladesh, and Nepal).

So when we judge the increasing environmental stress of China's consumption habits, lets take a moment to reflect on just how many people this energy is supporting, and how energy poor they are relative to us.
Posted by Unknown at 09:26

Email ThisBlogThis!Share to TwitterShare to FacebookShare to Pinterest
Labels: China, The Demand Side