China's reforms: No need to rush!

With the Plenum approaching, and what seems like an important juncture China's at, I have been spending a fair bit of time thinking about what sort of reforms I am hoping to see. In this post I had suggested fairly scaled back reform focused on reducing the effective tax on savers (via interest rate liberalization) and an expansion of credit for smaller independent firms.

I'll stick with that, but I'm reading many new stories and posts suggesting that this Plenum may introduce much more significant and transformational reforms:

"The reforms this time will be broad, with major strength, and will be unprecedented," he said, according to the official Xinhua news agency.
"Inevitably they will strongly push forward profound transformations in the economy, society and other spheres."

The media is largely reporting the following, where the "imbalance" of growth is now taken as a given:


The broad reform agenda is expected to steer the world's second-largest economy, which is experiencing slowing growth, from a reliance on debt-fueled investment to a more balanced model driven more by consumption, services and innovation.

Which begs the question: what levels of consumption and investment would we deem balanced? I find that many articles, like this one from business week, point to the flow factor while minimizing (or failing to mention) the aggregate capital stock.

The focus of flows on the nominal value seems to discount how capital poor China was, and still remains. My thoughts are shown graphically by the following graph from a 2012 Economist Article: 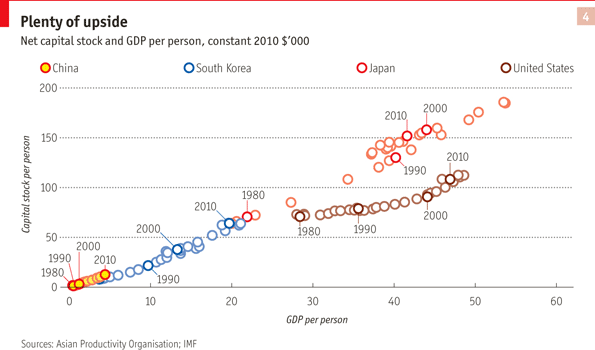 Now the fact that China's capital stock is significantly lower then more developed country isn't a surprise, and doesn't really get address the flow issue of how much should be allocated to investment as a portion of GDP currently.

A bit of Googling led me to this article titled: China: How Much Capital Investment is Optimal by Michael Pettis (who I read regularly despite missing this) who discusses the two approaches on evaluating what is/might be an "optimal" capital stock for China.

1. The Capital Frontier Constraint: This approach essentially takes the capital stock of the end fevelopment goal (say the US or Japan) and puts that fourth as the target. The logic is that the constraint holding the Chinese back from attaining first world GDP levels, is that they lack the capital capacity to achieve it.

2. The Social Capital Constraint: This approach says that an economy has a limited ability to absorb capital. This limit is determined by it's level of social capital. Often described as institutions in economic development parlance these include things like: rule of law, corruption, education, etc.

Pettis Summarizes the likely conclusions of taking these approaches:


Neither model has been proved. China may have too much capital stock, or it might not have enough, in which the current debt worries may simply reflect bubble conditions in the credit market. The policy implications of the two models, however, could not be more different.

If you believe that China can and should continue to increase investment until capital stock per capita approaches US or Japanese levels, then clearly China should continue to invest, and it should invest more in the poorer regions than in the richer ones. Everyone, even among the remaining China bulls, agrees now that Beijing must change some of its credit allocation conditions, but the old growth model will continue to be the right one according to the capital frontier model. There is no need to change the capital allocation process significantly and there is no need to liberalize interest rates.

What is more, according to this model, China’s very low consumption share of GDP mainly reflects the extraordinary growth in GDP. As high investment levels are maintained, it will simply be a question of time, and probably a short time at that, before the household income share of GDP, and with it the household consumption share, begins to surge. GDP growth can remain at 7-10% for at least another decade.

If you believe, however, that China’s very low level of social capital has long ago made its investment strategy obsolete, the consequences and implications are radically different. It suggests that China has overinvested beyond its capacity to utilize these investments economically, and so there are hidden losses on bank balance sheets created by the failure to write down physical capital to its true value. In this case Chinese growth cannot help but drop significantly as these losses are finally recognized and as investment levels are sharply curtailed.

What Beijing must do, in this case, is to ignore GDP growth rates and focus on household income growth rates, which anyway are what should really matter. Rather than continue to increase investment in manufacturing capacity, infrastructure, and real estate, Beijing should find ways to curtail investment growth sharply and to allocate what capital is invested to small and medium enterprises, to service industries, and to the agricultural sector, all of which are sectors whose growth at the expense of the current beneficiaries of high investment growth (SOEs, local and municipal governments, national champions, etc.) are likely to imply improvement in China’s social capital. Doing this will also require significant changes in the legal, social, financial and political institutions that constrain China’s ability to absorb capital efficiently.

So does China slow down the Investment share of GDP and invest in industries who's growth coincide with social capital accumulation? Liberalizing the financial market would certainly reallocate resources in favor of households and smaller enterprises. Creating a more equitable legal system and democratizing the political system would likely increase the personal well being, all else equal. But could this not have been said 5 years ago? 10 years ago?

When I look at the potential upside and the potential downside of public spending it seems that you'd want to err on the side of too much Investment. Ie. an inefficiently high investment level can be rolled back next year. Implementing serious social reforms (like basic welfare guarantees) will likely be there forever. I just worry about locking in a sub-optimal equilibrium that precludes the possibility of escaping the middle income trap.

The paper cited at the start of Pettis's article (found here) written by Houng Lee, Murtaza Syed, and Liu Xueyan titled: “China’s Path to Consumer-Based Growth: Reorienting Investment and Enhancing Efficiency” discusses the diminishing returns of investment on consumption and demonstrates that the growing inefficiency of investment is more pronounced in in-land provinces. The authors say:


In the past, China's high levels of investment created capacity beyond its domestic ability to consume, but this could be absorbed outside its borders, by an exceptionally strong global economy. However, with the world economy unlikely to return to the same dizzying rates of growth and with China already a dominant global exporter, the capacity it creates will increasingly be for its domestic market.


Inland regions would be better off cutting their overall investment, and reorienting a reduced amount of investment that would more effectively contribute to the capital stock and lead to more enduring beneficial impacts on consumption and economic activity. in this context, we find investments in agriculture and services to be superior as a result of their ore direct impact on house hold incomes...

The creation of a market will require a different set of skills that should be underpinned by transparent and simple rules for businesses. Otherwise urbanization could lead to growth of the urban poor, which will be more difficult to tackle than rural poverty...

Thus a greater reliance on market signals would seem inevitable. This will be possible only through financial sector reform, making liberalization of this sector an urgent issue... cutting investment, even if it is excessive, will inevitably slow growth. Here again, the only way to maintain relatively robust growth would be to raise capital efficiency.


On the whole, I'm in agreement with the direction suggested here. My concern is timing. The authors acknowledge that these same types of arguments could easily have been made for the coastal regions of China in years previous.

The coastal regions overcame this lack of social capital, they say, because external markets were able to absorb their product. Now, with Chinese goods saturating stagnant global markets, the conditions that allowed China's coastal regions to overcome inefficiently high investment levels are no longer there.

But is it possible for the inner Chinese provinces to exploit the growing consumption of the emerging coastal middle class in the same way that the coastal provinces utilized the global appetite for Chinese goods to make up for it's deficient social capital levels? The paper does outline that consumption is increasingly self supporting in eastern China.

The much maligned rising Chinese inequality will offer increasingly exploitable labor cost differentials inland. At what point would it become economical to move significant capacity away from the coast? I'm not sure. However, if you were planning to do this. Then having a world class infrastructure to get product from inland provinces to the coast would likely be a prerequisite. Think of it as a loss leader.

At this juncture I think the economic returns on a program, led by infrastructure spending, to increase capital in central and western China far out weigh the social spending and welfare system building spending that I will hopefully get to advocate for as China continues up the development ladder.

So my original hopes don't change. I think that both interest liberalization (to some degree) and giving small and medium sized private enterprises better access to funds would provide significant changes. They would signal that the CNPC will be moving in the direction that everyone is calling. But they will take the slow and cautious approach that has worked so well previously.

Email ThisBlogThis!Share to TwitterShare to FacebookShare to Pinterest
Labels: China