A bit of a rant coming on here. I'd consider myself politically libertarianish/liberal. By which I mean, I think governments do have a role to play, both in facilitating well markets and stepping in for markets where they aren't efficient. Conservatism has kind of been hijacked in the US to the point where I'd probably be considered a true Democrat in that black and white world (and would certainly have voted Obama in the last couple of elections). But that's not how I'd describe myself.


That all being said, I tend to split from more politically left commentators and more liberal minded folks in general discussion when it comes to inequality. Here are a couple of stories that got me thinking about this, with a rant to follow.

The long story short: inequality is not necessarily bad and poverty is objectively worse.

Marginal Revolution linked to this story on Reuters website about a growing civil discontent in San Francisco against the successful technology firms located south of the city.


The protest, organized by an advocacy group called Heart of the City, took aim at private commuter buses which whisk thousands of employees from stops around San Francisco to jobs at technology companies south of the city such as Apple Inc, Facebook Inc and Google.

Foes say the buses jam up municipal bus stops and remove potential customers from cash-strapped public transportation systems, including regional rail service, that could use their revenue.


The commuter-bus situation "has become very symbolic of what's happening to the city in terms of gentrification," said McElroy in a phone interview. "It's creating a system where San Francisco is being flooded with capital, and creating a technology class where other people can't compete."

Let me try to distill this type of sentiment down to two related, but conceptually separate issues:

1. People are paid higher wages then other people: Thus, some people are less able to compete for goods and services, all else equal.

My question is, so what would you do? Yes, if you increase the money supply in a closed economy, all else equal, prices will rise. But all else isn't equal. Other wages will likely increase as services are bid up and excess labor is soaked up. Additional supply capacity will likely be built in, creating more jobs and exerting downward price pressure. Increased local tax generation should help with local infrastructure. And so on.

Of course, housing does not adjust as quickly. Land is limited. Zoning restriction in some cities prevent significant vertical construction and so fourth. Is that reason to limit new and productive (as measured by the economic return on a venture) companies and industry from employing a cities citizens?

This reflects a certain sentiment in Canada concerning the impact of oil development. Let's put aside the environmental issues and focus on the socio-economic impact.

I had to go back through Google (isn't Google the best!) to find this article on inequality in Calgary that I recalled reading, but it did contain a similar sentiment (I know the difficulty in interpreting sentiment, so give me the benefit of the doubt here).


Ms. Hines – who spent a year in university but has no degree – has always made lower-end but respectable wages, most recently around $50,000 a year.

But that salary doesn't go very far in what has become one of Canada’s most expensive cities, where an oil boom has created reams of new money and driven up the cost of everything from housing to groceries.

Alberta has the highest average hourly wages in the country, but certain sectors routinely benefit more than others. For instance, while people in business, finance or sales saw large average increases in hourly rates over the past 12 months, wages in art, culture and recreation occupations dropped.

But buried in this article is the real money quote, this from the Mayor of Calgary Naheed Nenshi:


The Mayor said he’s hoping the city’s poverty reduction strategy, which council passed earlier this year, will cut the city’s poverty rate by half in the next 10 years. But he said he has a somewhat “agnostic” take on the issue of income inequality.

First off, would could be more equality inducing then the oil patch? The barrier to entry is basically: will you show up, work hard, and put in an effort to learn. If you come out to Alberta with that attitude and aren't afraid of getting cold and dirty you're making six figures no problem. But I guess it depends how you define equality.

While poverty itself is a subjective concept (In my opinion, 'poverty' in Canada is objectively different then, say, India (or the vast majority of the world)), I think we can unanimously say that reducing poverty levels is objectively a positive goal.

Throughout my professional life I hope to inhabit all quartiles of income level. I've certainly occupied the low end working construction and summer jobs interspersed with some backpacking and a masters degree. But I'm working my way up the corporate ladder. Is that type of inequality a bad thing? Not to me.

Thus, when 'poverty' and 'inequality' are discussed interchangeably we lose sight of an important distinction.

Take a look at China, we've seen inequality rise over the past few decades; are you going to say that the following graph displays negative trends? We're talking $1.25/day (2005 USD) poverty reductions corresponding with a rising GINI coefficient. 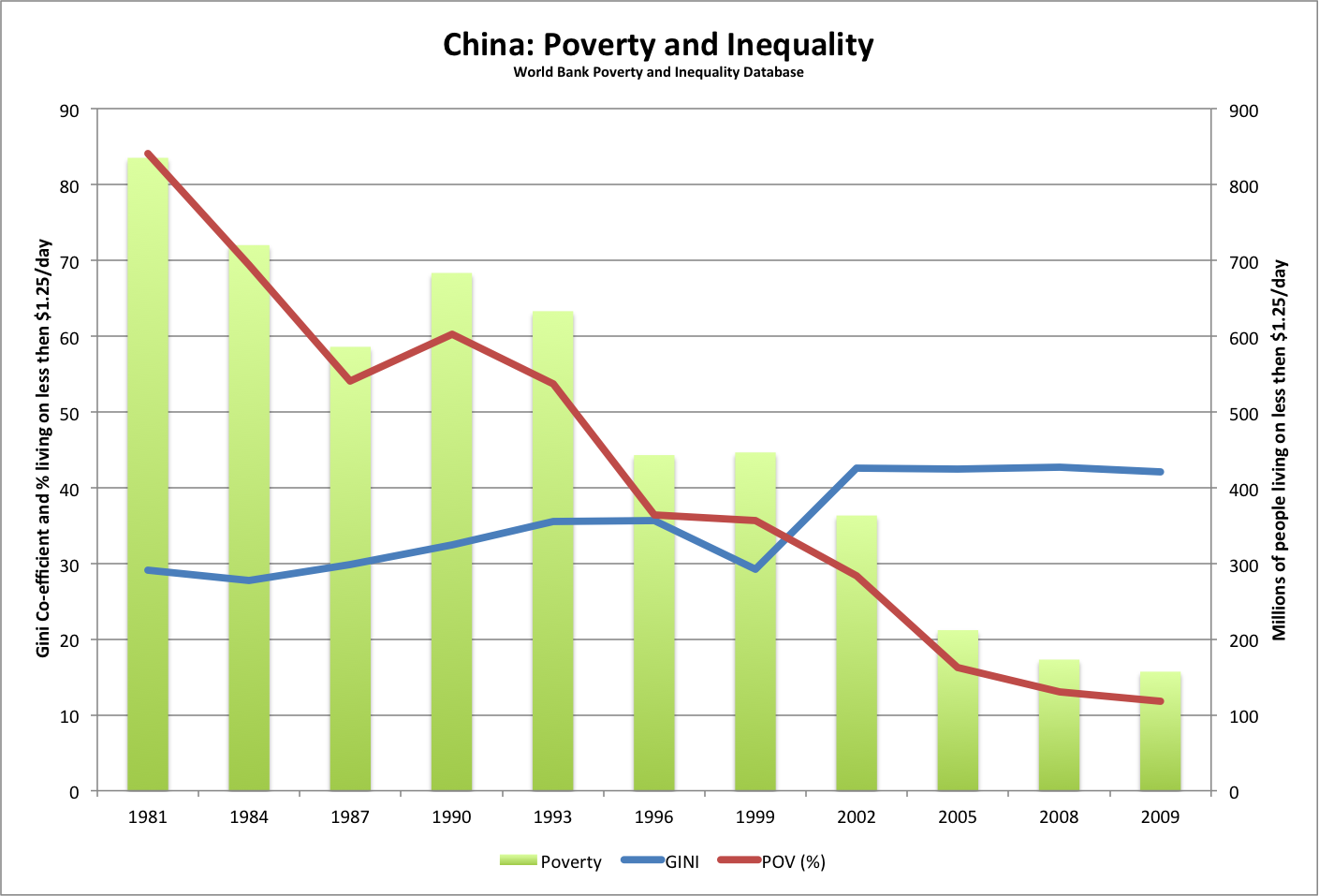 To me, the reduction of poverty is significantly more important then reducing inequality. That of course does not mean that rising inequality is not important. It just depends on the context.

Thus inequality that derives itself rom unequal opportunity under law, or politically (shaping the law) are both more troubling to me then income inequality.

We've done a pretty good job of ensuring our legal system is equal. It's not perfect, and having the ability to lawyer up certainly helps the rich navigate the system, if not simply exploit the system better.

Politically, well, I think it's ludicrous how much money campaigns cost in Canada, never mind the USA. Had the OWS movement focused on changing that instead of, wait, what were they focusing on changing? I digress. This doesn't necessitate a corrupt political system. But it's not hard to see how that might emerge.

Perhaps the most important form of inequality is those born in adolescence. At some level this is borne out of youthful ignorance and parental misguidance. Think about it, your adolescence are a base to build the rest of your life on. The classes you take in school. The summer jobs you work. The bad decisions you make at the bar. The relationship you make. These things can impact the path you start on at 18, which impact the opportunities you have at 25, which impact the opportunities you have at 40.

Youthful ignorance simply exists, I'm not sure how to get around that. Parental misguidance is not usually a fault of the parent, and I'm not sure if you can really address it ex-ante. It comes with reflection, it's a grown up reflecting back on the decisions he should have made, or had made for him in his youth.

While I don't have an answer to this type of 'inequality' my best guess is to ensure that kids get a good cross section of life experiences growing up. The greater the level of interaction with kids of all ethnic, social, economic, philosophical, and theological beliefs the better. Armed with that and a solid grasp of critical thinking I think gives everyone a base to build on.

And that's my most significant break from the economic right (notice, the 'economic right' rather then the 'political right') where I don't favour vouchers and private schools and parental choice (which I agree is likely better in an overall education achievement efficiency sense). Give me a less then optimal public school and a complete mixture of everyone and I'm happy.

But, I swing pretty hard back to the right by the time children become citizens (is 18 the right age? 19? 15? I haven't thought about this enough to have an opinion). My baseline safety net scenario is probably more generous then most on the hard right. But at some point people have to stand on their own two feet. They should be judged based on their actions and choices, not by where they were born and who raised them.

A society that does that (and I'm not saying this society exists perfectly) is the society I want to live in.

All of that ranting to basically say: income inequality requires a great deal more contextual discussion then is typically afforded (for example: complaining that really poor countries around the world becoming less poor causes domestic inequality.... without acknowledging that global inequality is falling because of this; or without acknowledging that the relative need for that income).