The Mackenzie Valley Pipeline: Will Bill C-15 Bring it back to life? 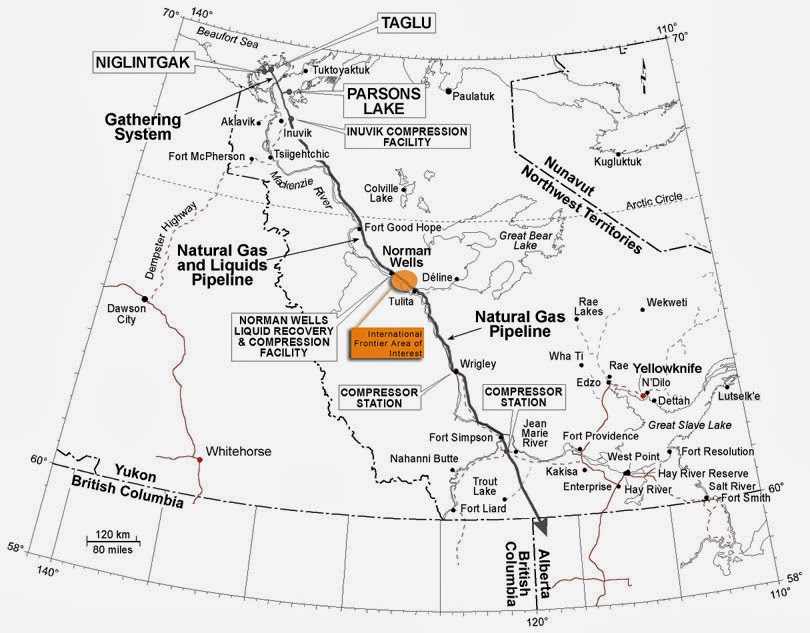 The much maligned Mackenzie Valley Pipeline, in Alberta it is talked about with scorn, ridicule, and as quick way to convey the timely nature of government processes; garnering similar eye rolling reactions that the NEP generates.

While the original proposal was for a gas pipeline that would allow the NWT's natural gas resources to find a southern market, why not flip the direction of it and fire oil north out of Alberta? How about an LNG terminal on the Mackenzie delta selling natural gas into international markets? Could the NWT be the answer to the landlocked Alberta and NWT resources?

The short answer is, I don't know. Is the water deep enough? Can they keep it clear of ice enough to tank the oil or LNG out? Are the NWT resources enough to justify it?

While the second issue will always exist (the quality of such a project has certainly improved since the 70s). A first step to remedying the economic issues is before the house of commons and will likely take effect in early 2014. Bill C-15: Northwest Territories Devolution Act will allow the NWT to take control of it's land, it's resources, and take more control of the proceeds from both. It also cedes more control of the regulatory process from the federal level to the NWT.


Currently, the GNWT makes decisions on behalf of its residents similar to a provincial government, with the exception of the administration and management of public lands, water, minerals, and oil and gas management. To address this, the Devolution Agreement lays out how this last set of responsibilities will be transferred from Canada to the GNWT for the onshore.

Additionally, Regulatory improvement, as outlined in the Action Plan to Improve Northern Regulatory Regimes, will help to streamline and strengthen regulatory regimes to support jobs, growth, and long-term prosperity while strengthening protection of the environment for future generations.

This bill was developed after consultation with stakeholders, including Aboriginal groups, Northerners, Territorial Governments and industry.

Now, this could mean that the status quo (ie. nothing material happening) would just continue under a new regime. However, if the Northwest Territories was governed by someone looking to develop their regions resources then this bill offers the potential for Albertan oil to reach tide water.

Enter Bob McLeod, premier of the Northwest Territories since 2011. Here are a few select quotes:

Here's a quote from an article in Mining Magazine (2012):

“We can’t afford to have our oil and gas continue to be stranded like they have been for over 40 years now,” the premier said in an interview in Calgary. “We think that the Asian market is something we have to seriously look at, and with the sea ice conditions changing, the ability to transport out of the Northwest Territories is not as daunting a task as it used to be.”

I can't seem to find much detail in terms of the viability of a tanker port anywhere along the NWT coast. From what I gather Tuktuyuktuk would be the logical destination, but it doesn't appear to be deep water port capable.

But the development of NWT's resources certainly incentives a transportation option. With the Norman Wells region likely being the area exploited, the Mackenzie Valley would be back in play.

If the NWT yields viable tight oil plays where would the oil go? Would an oil pipeline run north to tidewater? Down to Alberta via Enbridges Norman Wells, NWT - Zama, AB pipeline (capacity of just 50,000 bopd)? Would it head west through the Yukon, into Alaska, and on to Valdez? Would the cross border issue become the new Keystone XL?

That the NWT resource plays become economical is a huge hypothetical. However, with all of the issues facing resource developers, it seems having a (relatively) friendly jurisdiction to play in would be a significant incentive. Proactively coordinating first nations, regulatory, and environmental interests would certainly improve the economics of any marginal play.

If these plays aren't economic, would the NWT still consider a huge pipeline project? Would the benefit be sufficient? Hard to say. From my googling of Bob Mcleod he always ties his landlocked resources into these discussion without really mentioning Alberta's in isolation (assuming he is our best indicator of the prevailing attitude in the NWT government).

Temporary construction jobs and permanent maintenance and facility jobs would certainly be created, but would that be enough? With 41,462 citizens (as of 2011) the per capita benefit is certainly more impactful then for the average resident in BC. Plausible? Probably not. Possible? Yeah, it just might be.

Is it time to, once again, hold our breath for the Mackenzie Valley Pipeline? No, probably not. But it warrants some conversation. At the very least, Bill C-15 should give us a viable neighbour and some additional back up plans if XL, TMX Expansion, Northern Gateway, and Energy East all fall through.