In this five part post I'll take a look at the five story lines that I expect will be the most interesting for me to follow in 2014.

2013 saw China overtake the US as the largest importer of oil. It saw China show yoy fall in consumption for November. It saw China stave off a hard fall. Whether the performance is positive or negative China's economic performance will always be in my list of top POD stories.


China continues to chug along. GDP growth for 2013 should hit 7.6%. Slightly down from 2012's 7.8% but as I mentioned here the growth rate might not be the most impactful aspect of their growth:


The slowdown in China's growth rate is certainly an issue that the global economy will have to wrestle with. But I wonder whether it's the growth rate or the nominal change in the economy that matters here. In 2000 China's 8% real GDP (RGDP) increase produced a Nominal GDP (NGDP) increase of $100B. In 2005 China's 11.3% RGDP increase resulted in $400B more NGDP. In 2012 China's 7.8% RGDP growth produced $910B (it is worth noting that this is the equivalent of adding a Canadian sized economy every two years) worth of NGDP. Does 2005's 11.3% have a greater impact then 2012's 7.8%?

The Third Plenum in November (recapped here) lays the ground work for future growth that, I'd argue, seems plausible. There is still alot of low hanging fruit in China's economy and I believe they've established a plausible path to getting them.

So the headline growth suggests the oil consumption growth trajectory might be maintained. What may prove even more interesting will be watching the evolution of the composition of China's oil consumption. The message has consistently been to increase the consumption portion of China's GDP which has long lagged investment's contribution. 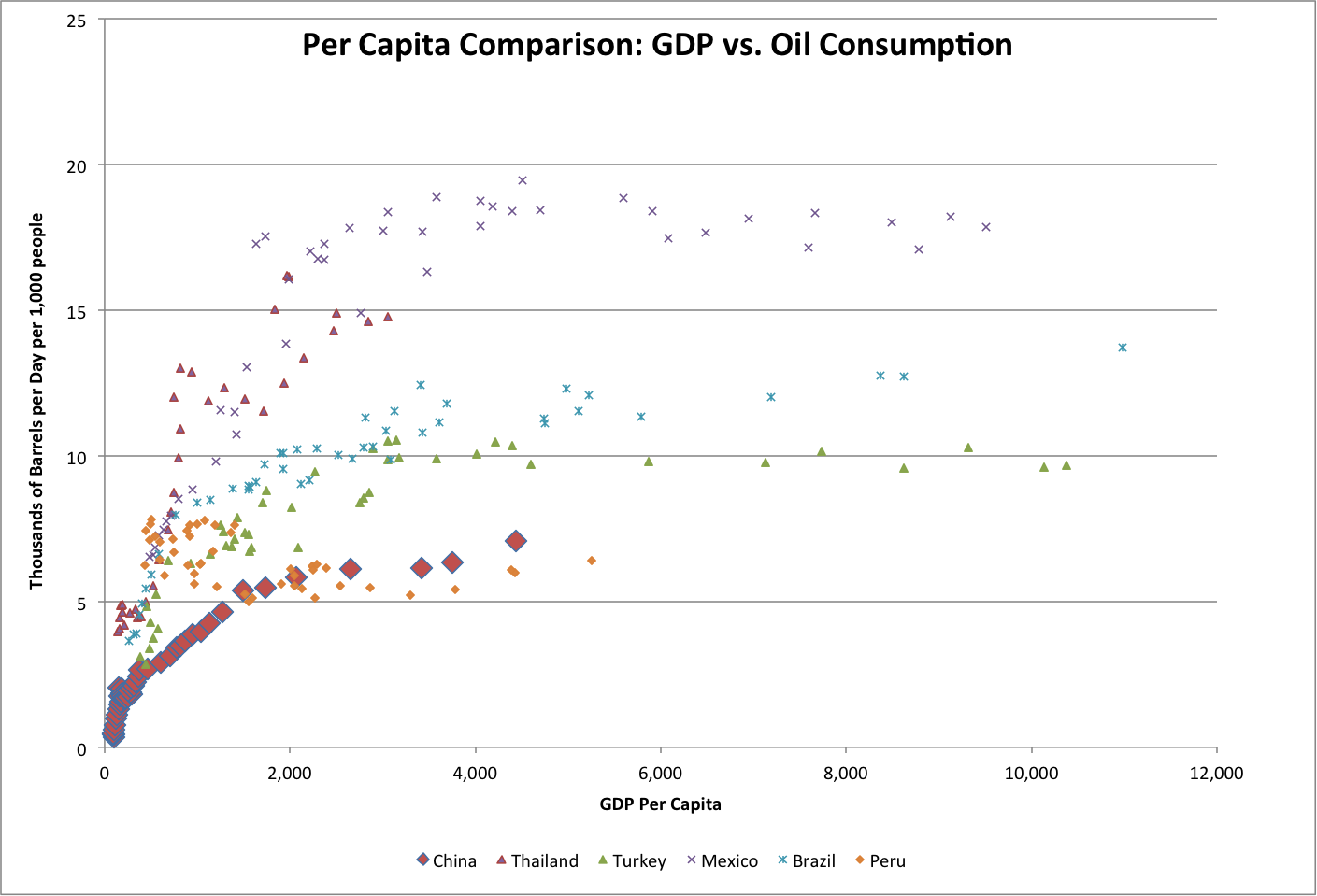 Just as GDP per capita and oil consumption per capita remain low by any relative measure, car ownership per capita is also very low.


Will the trend continue? Articles like this one from Reuters show declining import GROWTH and an increasing net export of products component, concluding:


Still, the current trend is clear: China has excess domestic refining capacity and demand growth for crude oil appears to be moderating.

Interestingly the article also points to growing efficiency in Chinese oil consumption when measured against GDP production (as shown in the graph of GDP per capita vs. Consumption per capita).

While this Bloomberg article summaries the IEA's  forecast:


What to watch for?


- What will the 2014 GDP growth rate be? With the government targeting 7.4% growth and 2013 GDP (7.7%) exceeding the target of 7.5% it will be interesting to see what happens in 2014. My thoughts? I'd be surprised to see GDP growth dip below 7.5%, but not terribly surprised. We've got a complex transition going on in China.  2014 should give us a good look at the internal restructuring of the economy from debt fueled investment to a more sustainable consumption based model, while hopefully giving us a glimpse of how trade flows have been impacted as the american economy continues to recover and Europe begins to turn the corner. China still has alot of low hanging fruit to pick. And some real upside potential if the reform package outlined in 2013's Plenum. It's hard for me not to give the CPC the benefit of the doubt after the past couple of decades.

- How will China fare in it's quest to unwind the local debt issue? It's hard to tell what type of impact this might have. Since the data coming out of China leaves something to be desired, we don't even know how extensive the debt levels are.  If they are as bad as some say, and if they are as non-performing as others say, then these toxic assets will have to find a home somewhere. If levels are manageable, then we might see local governments roll them into a more traditional market informed debt issuance system that would fit a more developed economy.

- How active will China be in Energy sector acquisition and joint ventures? With Iranian, Libiyan and Iraqi bringing back significant quantities of oil to export markets we might see a softening of prices (I wouldn't expect average prices for Brent below $100 or WTI below $95 for the year reagrdless) which might entice China with some attractive targets. Or conversely, if the POD notion isn't in effect, US continues ramping up production, the new old barrels keep hitting the market, depressed consumption in developed countries is not cyclical, then perhaps China feels secure in their current and future production. I'm predicting that Mexico and China announce some large scale major Joint Venture plans.
Posted by Unknown at 00:38