OPEC's meeting concluded with a resounding shrug of the shoulders. At the end of the day it was the Saudi's decision. I had suspicions that they'd communicate price support at some level; but in hindsight why would they? At the end of the day, I can't think of any particular self interested reason for them to do so.

The interesting thing about this meeting, and given the complexity of modern finance, I was curious to see how price would react to OPEC's (the Saudi's?) communication; and specifically so. Forward guidance, is pretty well understood to be the dominant tool of central banks.

When credibly made the bulk of a centrals banks adjustment is done by markets inline with their expectations. So, if a central bank continuously targets 2% inflation and continuously undershoots it. The market prices in the undershoot. If a central bank announces the injection of funds on a short term basis, the markets price this in and money neutrally basically holds.

Would the Saudi's be able to achieve price support, simply by communicating a target? Would the world believe them?

We certainly saw markets react to OPEC's shoulder shrug, WTI quickly shot from $74 USD down to about $66, similarly Brent plummeted from about $73 to $70.  And I suppose we'll never really know if it's reaction would have been symmetrical (asymmetrically interesting to me).

Why would the Saudi's enable OPEC?


Had the production cuts been proportionately felt across OPEC members, it might make sense. If Russia had indicated that they would also be willing to curtail production in pre-meeting talks, then it might have made sense. But if the Saudi's have to bear the entire burden, why would they?

Vox's Brad Plummer outlines this point here. The key is probably in this Reuters article linked to in this article describing who would be bearing the brunt of that production decline:


With world markets awash in oil, Saudi Arabia embarked on a strategy of defending prices, which at the time were largely set by exporters rather than the nascent futures market. The kingdom slashed its own output from more than 10 million barrels per day in 1980 to less than 2.5 million bpd in 1985-86.

Other producers failed to follow suit, however, both within the Organization of the Petroleum Exporting Countries and among new petroleum powers such as Britain and Norway. Prices fell into a years-long slump, leading to 16 years of Saudi budget deficits that left the country deeply in debt.

Plummer also links to this often cited look at government budgetary break even price of oil for OPEC countries. I still see this as apples to oranges. 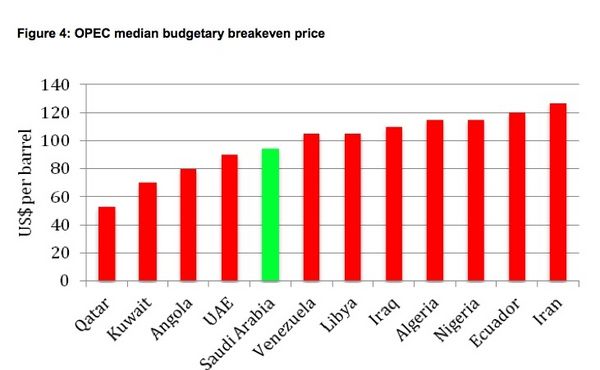 No only do I believe that the Saudi's along with the rest of the gulf states likely set budgets according to revenue more then they raise revenue according to their budget. But the ruling regime does not hold the tenuous position, politically or economically then the other major exporters (of course including Russia which is not in OPEC).

With both Russian and Mexican officials meeting with Venezuela and Saudi Arabia pre-OPEC this probably presented a crucial test of price support viability. Between Russia and the Saudi's a joint strategy, would have significant market power due to not just their high level of production (Russia at 10.5 mm/bopd and KSA at 11.6 mm/bopd) but also their relatively low consumption levels (Russia at 3.3 mm/bopd and KSA at 2.9 mm/bopd) in contrast with the USA who, despite a huge upswing in production remains a massive importer on global markets.  It's these net available exports that are the interesting barrels to me on the market place.

Russia's Part in all of This.


But it's hard to imagine Russia artificially reducing production (as opposed to some new projects becoming uneconomic at low price levels) with the sanction package biting down on the economy. This article estimates that effect of oil and sanctions at $90-100B and $40B respectively.

This could make for an interesting winter. As far as I can tell, besides an escalation of the war, Putin's only real leverage would be physically delivery (mutually destructive) and a huge stockpile of nuclear material and know how. That or Putin backs down physically and rhetorically.

With no price support OPEC (KSA) made a clear statement that it would let markets dictate things going forward. It was always a fractious bunch and with the only partner, with both the production levels and political leeway to do anything but maximize oil revenue (the Gulf Emeritus would have the ability, but not the gross quantities), unwilling to cut production. OPEC basically isn't.

As for the Saudi's motivation, it may be a fight for market share by way of undercutting the more expensive marginal barrels on the market. From OPEC's official release:


"world oil demand is forecast to increase during the year 2015, this will, yet again, be offset by the projected increase of 1.36 mb/d in non-OPEC supply.  The increase in oil and product stock levels in OECD countries, where days of forward cover are comfortably above the five-year average, coupled with the on-going rise in non-OECD inventories, are indications of an extremely well-supplied market."

If the Saudi's are going for market share the obvious play to target is the rapid build up in tight oil production in the US. Not only is it fairly expensive (estimates oscillate in aggregation, to say nothing of the wide variation in per well/per location costs) but it's also typified by relatively steep decline rates.


You have to remember that once the investment in discovery, drilling, and establishing the production infrastructure, not in maintaining existing infrastructure and production. With increasing decline rates on each well any interruption in those initial capital outlays result in a much steeper drop in oil production.

Tyler Cowen links to this article by William Watts on Marketwatch that makes an interesting point:


At the same time, analysts have also noted that for many shale producers, a large chunk of production costs - acquiring acreage, contracting wells, etc. - have already been spent. As a result, the more important figure might be "half-cycle" production costs which analysts at Citi last week pegged at between $37 to $45 a barrel"

Eric Lee who is one of the Citi analysts on the report in Platts:


a “full capex cycle” shale project might have a per barrel cost of $70/b or more, but one that is a “half cycle” project, where a lot of the costs are already sunk, could be down into the high 30’s. Overall his conclusion is that a $70 basis WTI price could slow the roughly 1-million b/d growth rate in shale by 25%. “It looks like you would need about a reduction in rigs of 40% to 50% to really flatten production growth, and to do that you’d need about $50 oil,” he said. Overall then, the impact of the price fall on US production growth will be “soft.” (Morse noted that Citi has not changed its robust projections for higher US output.)

I couldn't find the Citi report. It would be interesting to see how they got to these numbers. But we'll have to settle with for the author's synopsis. I'd be pretty curious to see the timeframe the author is speaking of. Certainly that full capex cycle number increases in importance as time rolls.


I effectively read this as OPEC being no more. If there was a deal to be made, it would have been made between Russia and the KSA. There's an alliance to watch for. Maybe not until sanctions end. Maybe if sanctions intensify. Maybe never.

The things I'll be watching beyond the price of oil: Russia/Euro sanction negotiations, Russia in the Middle East (and Iran), Chinese oil consumption.

Email ThisBlogThis!Share to TwitterShare to FacebookShare to Pinterest
Labels: Peak Oil Dynamic, The Supply Side