Learning about the Oil & Gas Industry on the fly I leaned heavily on the now defunct Oil Drum (I now frequent peakoil.com) for it’s aggregation of relevant news from around the world.  However, it was in the comment section where industry types and a diverse set of experts allowed newbies, like myself, access to their wealth of knowledge. The term: “Peak Oil Dynamic” or POD was coined by a commenter going by the handle of ‘Rockman’. The intended definition is loose, but this is how I will define the term for now:

Peak Oil Dynamic: The actions and conditions brought on by the changing relationship between the supply of and the demand for oil in an increasingly scarce market.

While this definition implies the notion that oil production will peak (which as a scarce non-renewable resource it must). The timing of, and level at which this occurs is not what I find interesting. My basic assumptions is simply: there are more new sources of consumption then there are new sources of production. Even if you don't buy the notion that we are anywhere near an actual production peak, the POD is still in play due to the rising consumption in the developing world. The basic story is illustrated in the two proceeding graphs: 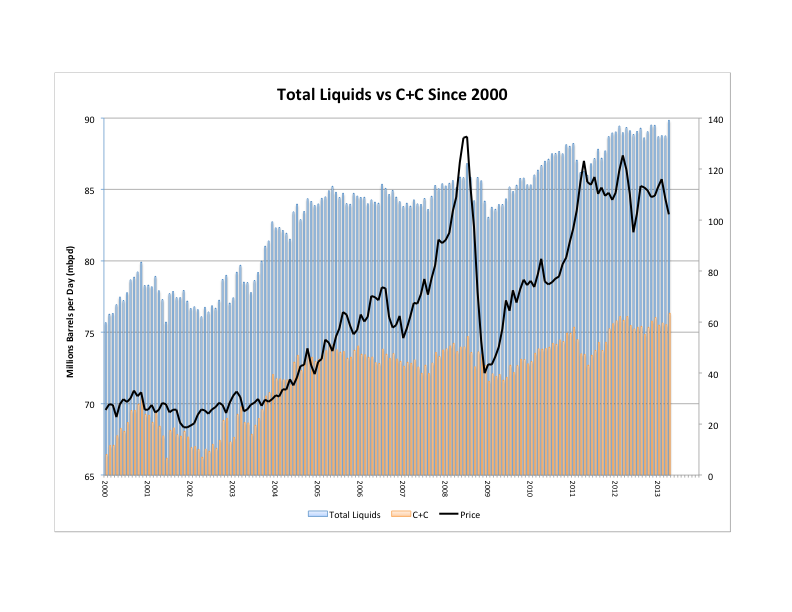 This graph takes a look at Total Liquids and Crude + Condensate (C+C) with WTI prices since 2000. My area of interest is the period from 2005 onwards. We will explore the differene between total liquids and C+C but what we can see is that despite the huge run up in prices from the $40s to more then $100 production of C + C is up marginally from 74 mmbpd in April 2005 to 76.3 mmbpd in April 2013.

On the flip side of the POD coin is the demand side. The pricing incentive that is currently motivating producers should also be discouraging consumers. While we have seen some declining consumption in the developed world, the developing world has pushed global consumption to new levels. 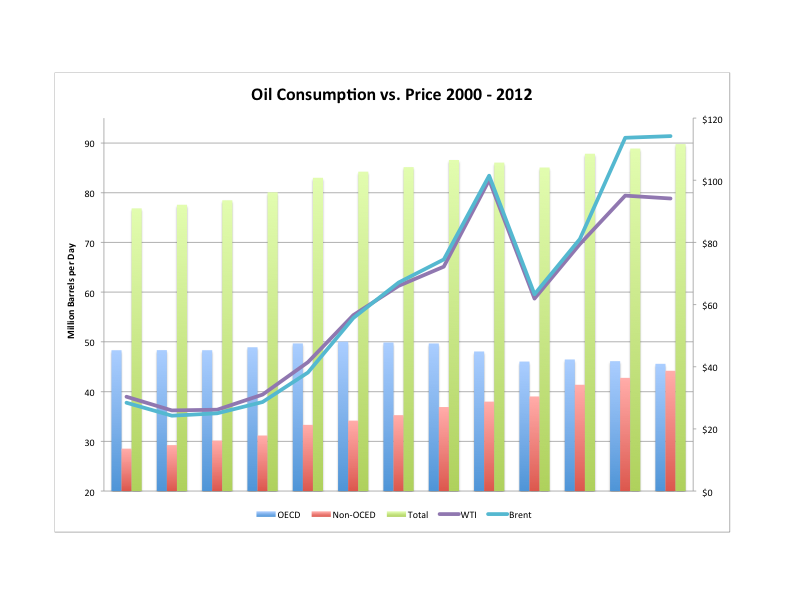 These two graphs summarize the assumptions upon which I assert the importance of the POD. Something is going to have to give. How much lower can developed world consumption sink? At what level will developing world consumption plateau? Will we be able to increase production? By my definition, the actions and strategies taken by producers and consumers, individuals and companies, and governments and voters, in light of these questions, is where the POD will play out.