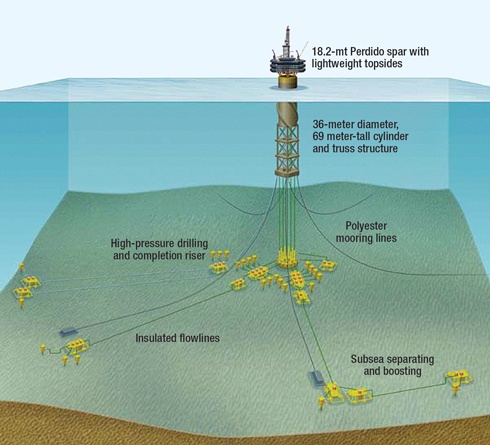 This picture of Shell's Perdido spar is from this article on worldoil's website and was built at a cost of $3 Billion Dollars. It's expected to produce up to 100,000 bopd and 20 million cubic ft of natural gas per day with a projected lifespan of 20 years.

The following story describes the events leading up to the find that the structure pictured to the left will be producing. The scale of the project is impressive, the quantity of output is massive, and the size of the gamble and the stones that it must have taken to make that call are hard for me to imagine.

This is an interesting read about the development and potential for the Gulf of Mexico. Impressive is the scale of these projects. At the time of BAHA the prospective well was in the deepest water that had ever been drilled. It was truly exploratory in the sense that they were fishing for information while expecting to fail. Like calling in poker when you know that you're beat. Sometimes, seeing some cards and gaining some information is worth the loss. The next go around provided, well, another expensive bit of information; BAHA 2 costing more then US $100,000,000 to drill came up dry as well. However, the information gained has revealed a layer of oil rich sands that had never been known to exist.

But it's the scale and success rate that I find impressive. Think of the gamble involved in those exploratory wells. Even at that the following illuminates how often these multi-million dollar wells return precisely zero $ (since they can't have a bunch of stripper wells in the deepsea):


The success rate in the Lower Tertiary so far has been about 60%, with 40% of discoveries having commercial potential — a “tremendous” rate considering that 30% is considered good, Chevron’s Ryan said.

This with costs estimated at US $1MM per day to drill an ultra-deep well.  It sounds like the developments in seismic equipment and computer power have played a significant role (allowing geologists to see through previously impenetrable salt deposits). This sentence summed it up nicely for me:


New technology has been the key to unlocking “one of the unrivaled basins of the world” thanks to its geology, commercial potential, and pipeline and production infrastructure, said Ernie Leyendecker, Anadarko’s vice president of Gulf exploration.


Scraping The Bottom of the Barrel:

Coinciding with the Gulf of Mexico exuberance mentioned above, we get this story from Norway. Once considered depleted, these mature fields are set for another round of action:


A record 50 oil companies, including all but one of the majors, applied to take part in Norway's mature areas licencing round, indicating continued exploration interest even as the country's oil production sinks to a 25-year low in 2013.

Exploration interest has taken off in areas once considered depleted as major finds, including the giant Johan Sverdrup field with up to 3.3 billion barrels of oil, revived hopes.

Although most finds in mature areas cannot support a standalone development, a vast network of infrastructure off the Norwegian coast will make many of the projects viable, the ministry said.


I have to admit that my knowledge of what governments typically rebate on drilling costs is essentially nil. However, it does appear that the Norway government has significantly altered their policy here. I suppose it makes sense to squeeze every last drop out of the North Sea while they still can.

I think the juxtaposition created by these two types of stories cause problems for those looking for a straight line narrative to the trajectory of our oil supply. While both are very much reliant on on the increasing price of oil to be economic, the new tertiary production zones found in the Gulf of Mexico seem (to my untrained eye) to be a direct result of our improving technology. That is, we found something that we didn't know was there (unlike the Bakken or Eagleford Shales which were known, but not economically exploitable) and this fits with the narrative that technological progress will actually increase the known resources, or we can increase our estimated OIIP. That we have such interest in Norway's mature fields, where our aim is to increase the ultimately recoverable portion of the OIIP, leads me to wonder about the frequency with which these truly new types of finds are expected.

The offshore drilling services market is driven by increasing offshore discoveries and exponentially increasing demand for energy across the globe. The major existing areas of offshore activities such as the golden triangle which includes the Brazil, US Gulf of Mexico, and West Africa are the key markets where offshore operators and service providers have their focus. Asia-Pacific is the emerging market in terms of demand for energy and offshore drilling activities.

Thawing sea ice has also attracted energy companies to drill in the Arctic Ocean, which is estimated to hold about 20 percent of the world's as-yet undiscovered oil and gas.

Russia has made tapping the Arctic's oil and gas a priority to develop a $2.1 trillion economy that is reliant on exports of energy resources. Ecologists fear drilling in the virgin region risks destroying the Arctic's unique wildlife and causing damaging changes to the global climate.

These last two stories illuminate the lengths that we'll need to go to find new oil sources. I like articles that clearly outline that the increasing demand is allowing these new oil frontiers to be explore and the cutting edge technology to be exploited. I think we like to pat ourselves on the back to often and credit our ingenuity for things that are perhaps better explained by price incentives (ie. tight oil and fracking).
Posted by Unknown at 07:06