China doesn’t consume enough oil. In fact, we should all hope that China can continue to increase their consumption of all natural resources; oil included. Those are a couple of sentences you probably won’t read to often these days. And this isn't just my Albertan self-interest talking. Hear me out.

That sentiment begs the question: what is ‘enough’ oil? While I’m not sure if we can actually determine an optimal level of oil for an economy without assuming away far too much information, oil consumption and economic performance are highly correlated. Thus, my belief that China doesn't consume enough oil is simply an observation that China is still an extremely poor country. A fact that we don't hear enough. My hope that China can maintain their growing consumption, is that it would necessitate China maintaining their current economic trajectory. It boils down to to me hoping that poor people become less poor. That's a pretty easy bandwagon to jump on!

Here is a graph on energy usage that I pulled off of Brad Delong's Blog sourced from Economist David Roland-Holst: 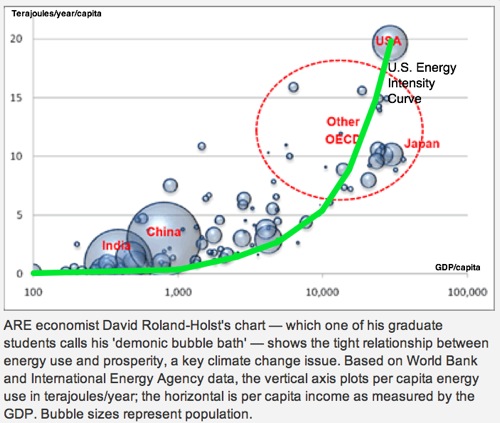 It's quite clear that energy usage highly correlates with prosperity. I'll get into the composition of energy sources in a later post but the thing about oil is, it is difficult to substitute away from. We're seeing a push towards natural gas vehicles in some developing countries (Iran, Pakistan, Argentina, Brazil, India, and China are the leaders) but with just 17.25 million NGV out of a total vehicle fleet of over 1 billion (as of 2011) this is hardly a dent. Thus my focus on oil will remain.

The truth of it is, I hope a green alternative energy source becomes economical in the near future, but until this new paradigm is here (and nobody is doing more to achieve this end then China), we have the options that we have.

My opening statement goes beyond just the fact that I hope China get's rich enough to consume more oil. Relative to countries in their gdp per capita range China also consumes relatively low levels of oil per capita. Here's a graph using data from BP, the World Bank and the UN: As always, there is a great deal of context to these numbers. The implications of economies of scale, geography, and demographics not withstanding we see that of the 6 countries that I've included China is consuming oil rather efficiently. It's also interesting that these countries all seem to hit a plateau around the $2,000 (current USD) mark and asymptotes. We'll explore this, and the middle income trap when discussing China's economic prospects in the future. If Chinese oil consumption also hits a limit at, or near it's current consumption level of 7 barrels per thousand citizens I believe this would reflect a huge break through scientifically, or a massive unravelling in China economically. Until the first happens, we should all hope to avoid the second possibility and cheer on China's oil consumption.

This is also where China's sheer size adds an extra dimension relative to the future path of other countries (India not withstanding). If Chinese consumption rises to the paltry (by our Canadian standards with a corresponding ratio of 67) level of the Mexicans taking their consumption from 7 to 17. The aggregation results in China consuming over 23 million bopd. A 13 million barrel increase from the 9.6 million actually consumed per day in 2010. Let me repeat that: if China consumes oil at the same per capita level as the Mexicans, an additional 13 million bopd will be consumed. For this level of consumption to occur, and assuming supply struggles to keep pace, then we'd see a significant impact on prices. Pricing incentives to consume less would probably force the Chinese to stop short of this 13 million bopd addition. But at what level? Chinese oil consumption has marched right on through the historic price increase that has stabilized around $100.

This is why I will spend alot of time discussing China's impact on the demand for oil. They will be the dominating factor on the demand side of the oil dynamic for the foreseeable future.

Email ThisBlogThis!Share to TwitterShare to FacebookShare to Pinterest
Labels: China, The Demand Side