The next 5 posts will be of the most interest to me going into 2014 in the realm of the Peak Oil Dynamic.


This post is, to a large extent, inspired by the events that transpired in Mexico and Iran during 2013. The title of the post reflects the potential of gaining 'knowable' oil. Forget about the unknown type of 'finds' in Coober Pedy, or the unquantifiable shale plays of Eastern Siberia. This production is different.

There is also a continuum to watch with Iran and Mexico as polar opposites. Iranian oil production 'just' requires political solutions. Mexican oil will require massive investment and restructuring of it's dilapidated oil industry. Iraq and Libya fall closer to Iran with countries like Venezuela falling closer to Mexico.

But Mexico and Iran are a different sub-set, and both are entirely different form each other.

The constraints are political. In Mexico's case the constraints are internal and, at least in principal, have been removed. As outlined briefly in this post, the national oil company of Mexico (PEMEX) has maintained an effective monopoly over all things petroleum in Mexico since it was created during a round of nationalization in 1938. 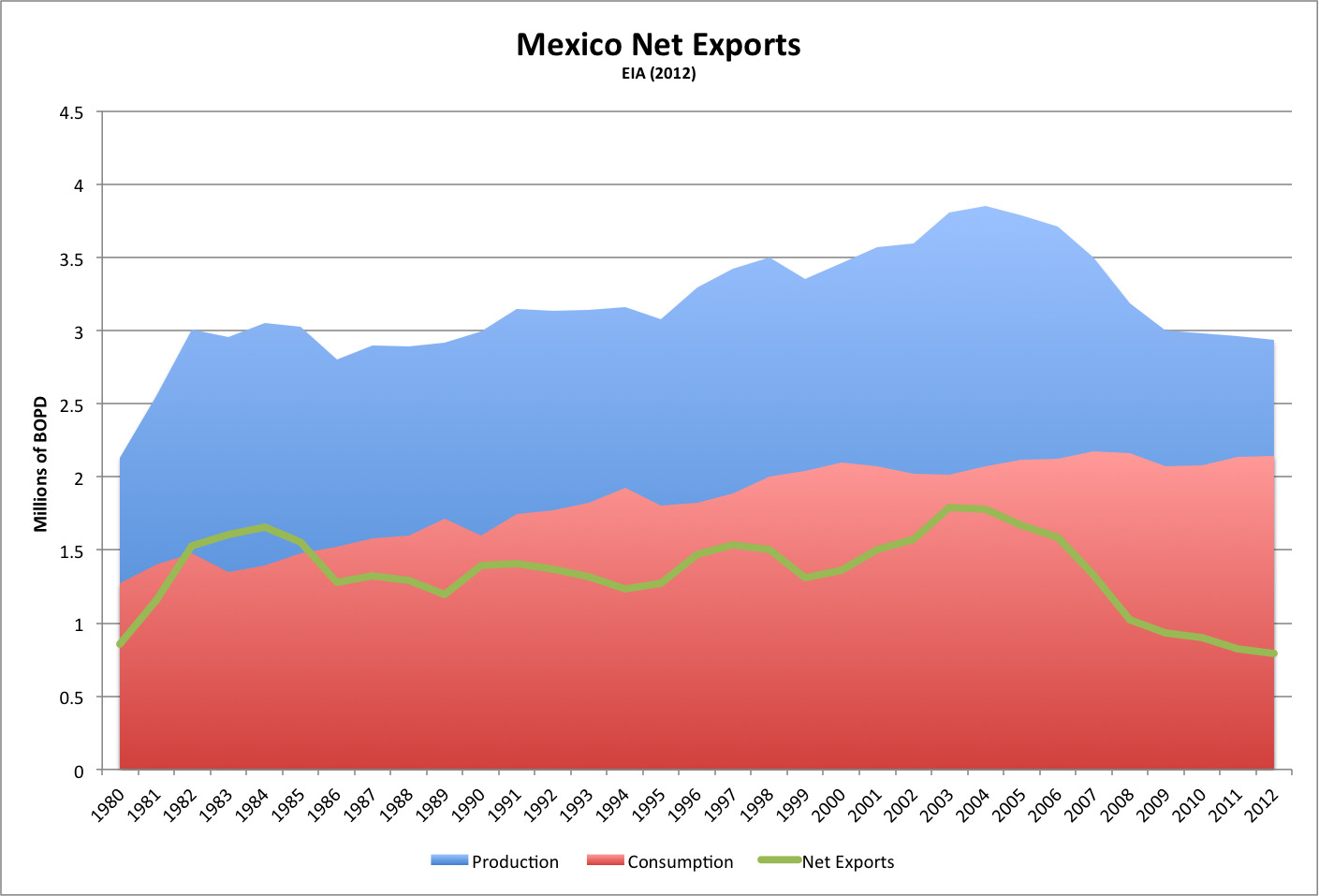 Under the weight of falling production, allegations of corruption, lack of investment, lack of exploration success, and a loss making refining division the Mexican senate passed a bill that could pave the way for foreign entrance into the market.

Currently, Mexico is on it's way for export-land model territory, where rising consumption coincides with falling production. Any hint at a reversal of this trend would be huge.

The emergence of a possible thaw in the relations between Iran and the world (ie. the US) coinciding and/or as part of the Russia/Syria resolution was either a stroke of genius by Obama or dumb luck. I already look forward to his memoir. The impact that this would have are potentially huge: 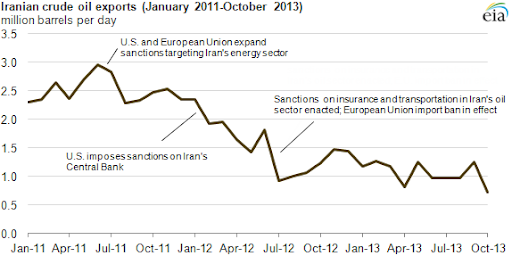 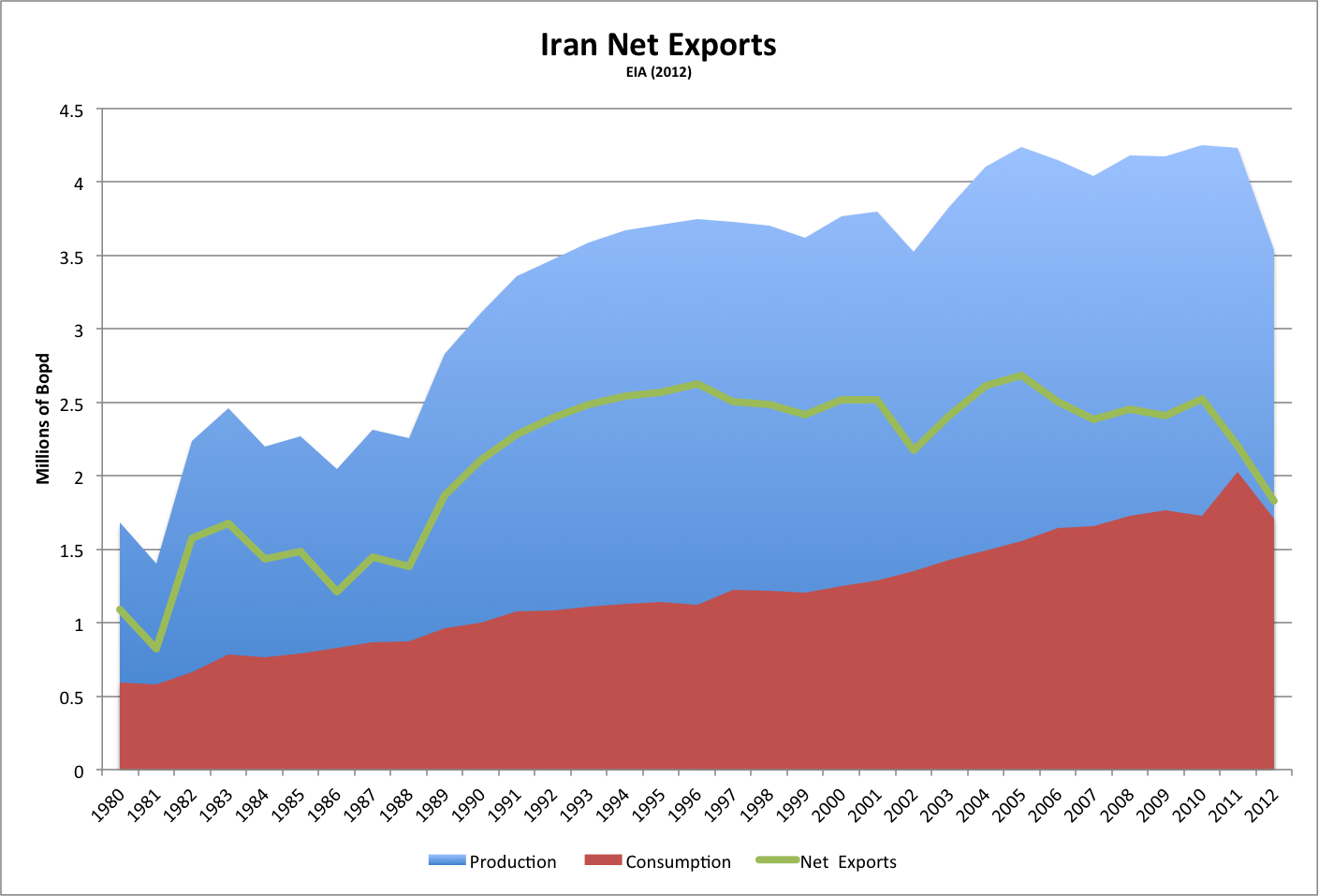 So after steps in the right direction in 2013 where will these movements leave us? 2014 will give us time to see how serious the Mexicans are about reform, and weather the deep pocketed and technologically capable foreign players are willing to risk another round of nationalization.

We'll also see whether or not Obama can dance around congress and the political minefield that is the middle east to table a real path to normalization.

The potential to bring significant oil supply to market is huge. Mexican production potential is much more speculative and much more expensive, however it's proximity to corresponding economic plays in the US bode well.

It has access to both Pacific and Atlantic oceans gives it excellent market and would help mitigate growing differentials. And, perhaps more interesting, it's very unprofitable refining sector and it's current position as a net importer of refined product, offers up a nice foot in the door for someone that can offer refinery expertise and financing.

Domestically Neito has a tough sell. We all know how nationalistic the general public can be with respect to their natural resources. The possibility added investment and the 'energy security' we always hear about that a bunch of domestically located refineries projects would provide. Repayment via JV and added production might not hurt either. Know any companies/countries that might offer these types of terms? I'll be curious to see, and might even predict, some flashy JV deals in 2014.

With Iran, we would get some nice conventional barrels back on the market. Watching the political developments in Iraq and Libya will also be interesting, as they aren't physically constrained and have the potential to add more cheap conventional barrels to global exports. However, their Iranian situation is simply political and this interests me more.

However, no predictions from me here as the variables are just too many, and to my eye incomprehensible.

Despite the recent deadline miss (they are in the midst of a civil war) I expect (and hope) the compliance of Syria with the Russian encouraged deal that would see all chemical weapons stockpiles destroyed by June of this year will be completed in 2014. I can't help but assume the Iranian regime was cooperative in this process. A positive.

However, we do have US mid-term elections, Israeli concerns, the Saudi's, Iranian domestic politics, and the on going Syrian resolution as the obvious stumbling blocks for normalized relations. If Iran demonstrates cooperation on all fronts but normalization gets held up because of domestic American issues I wonder how difficult it will get to maintain such globally imposed sanctions.

All in all, the political situation in both countries will be interesting to follow in 2014. Mexico desperately needs investment now, for production potential 5-10 years down the line. Iran just needs the green light to turn on the tap.