There (May) Be Blood

The specific numbers thrown around, guessing the peak level, have been surpassed. But the overall trend described still makes sense to me. What we are seeing now with the collapse in oil prices is certainly going to put this basic notion to the test.

Again, the basic logic: when wells decline quickly (relative to 'traditional' wells) growth in production MUST come from GROWTH in the number of wells being brought on line. That is key, growth comes from an ever increasing INCREASE in wells. Not an increase in over wells in aggregate, since there is a need to replace the rapid run off.

The story described above held that once the best areas of these finite oil plays were drilled up, the production rates of individual wells would fall, requiring either an increase to the increasing increase in wells (think about it) brought on line, or a leveling of production into a steep decline in production (relative to the long slow tailing off of production in traditional oil plays).

So in this story, the price of oil remaining high was assumed. The production decline was motivated by the inability to continually increase growth in new wells (ie. the market for drilling rigs would be at capacity) and/or the decline in production of new wells relative to older wells (the creaming effect).

Now, consider that this story is strictly about physical properties (although the rig capacity might be construed more as a financial property). This doesn't take into account the financial constraints that producing companies are under. For companies that are highly levered, and assuming the financial institutions had based their lending on future cashflows that took status quo production behavior (ie. not considering the creaming effect or the increasing increases effect (I need a name for that)) then if either of these two factors moved in any direction besides positive-positive, we'd likely see forced liquidation into a market that would then be pricing in the new (not positive-positive) understanding of future cashflows.

For anyone to really be an awesome prognosticator they'd have to have seen the 50% drop in oil prices. I don't think anyone has really nailed this. However, this drop in prices exogenously imposes this reduced revenue condition on companies (and their lenders) that would have resulted from a deterioration of the positive-positive scenario.

What should we watch for? The biggest wildcard is how long the depressed price of oil should last. Any marketish monetarist (like myself) will tell you that a central bank's best tool in enacting monetary policy is simply stating what you will do in the future. The market reacts to what it thinks is being said, and how credible that is. So the ECB (and the FED to a lesser extend) has constantly undershot the stated 2% inflation target (despite having a dual mandate that should require overshoot in the FED case). So the market basically prices that in. This is why FED statements are so heavily analyzed (we're beyond what they say, but how they say, what mood were the trying to express, etc. etc.). The market is saying: Ok we see what you're doing now, but what are you likely to do in the future. How will that impact the market (This is why a price level of NGDP level target makes the most sense to me, but that's another story for another day).

The interesting choice by the Saudi's to simply say: we're pumping this oil out period. Is that the market gets to weigh: can the physically do it? and, will they actually do it? Well physically, yes, they can produce oil profitably at whatever price the market wants (as far as a best guess goes). They have the cheapest large deposits of oil anywhere. The only corollary to that is in the "budget break even oil price" stat you see trotted out. Ignore that, it doesn't apply here. Will they actually do it? They need the market to think so. They have an example where they didn't do it (in the 70s) where they got screwed over by OPEC (the Saudi's were the only producer to cut).

My guess is they won't do it long term. But from their perspective it makes the most sense to convince the market that they are doing this on a going forward basis. If the market was to price in a Saudi production reduction, or if the Saudi's were to announce a price range they'd like to see oil at, the market would either price that into current prices or, perhaps more importantly for American tight oil, would discount future cashflow accordingly.

And that is the kicker. Now that the market isn't so wildly optimistic about shale, how will this impact drilling. If there is a drop off in drilling, according to the story told above (and the best guesses that I think are the best, best guesses (think about it)) any slowdown in the increasing increase of new wells, will exert strains on future cashflows (the upfront capex savings offsets some portion of the loss in revenue, but again, it depends on the leverage piece).

Are Cracks Starting to Show?

This article from the New York Times (via the Economic Times) identifies a couple cracks starting to show:
The national rig count had remained surprisingly resilient over recent months even as oil prices dropped by more than 50 percent since June, and it still tops the count of a year ago as domestic production continues to surge.

But an announcement on Wednesday by Helmerich & Payne, the giant contract rig company, that it planned to idle up to 50 rigs over the next month sent shudders through the industry. And that came on top of 11 rigs that it has already mothballed, meaning that in just a few weeks, its shale drilling activity will be reduced by about 20 percent.

Again, oil producers rely on increasing increases to maintain tight oil projection trajectory. What will happen if the increasing increase of wells drilled/completed stagnates or declines? Well certainly a decrease in production. Since the tight oil of the US (and the Oil Sands of Canada) are likely the greatest contributor to the global supply glut, we'll likely see the markets equilibrate to a higher price level.

Under this umbrella of assumptions. And all else equal, we would expect these tight oil producers to shut in wells until price rebounds. But all else isn't equal here. If a company is highly leveraged or if they've locked themselves into production quotas (for pipeline/rail space contracts) they may be forced to sell into a depressed market.

Access to finance is typically constrained by cashflow, expected cashflow, and equity.

Here's Nick Cunningham on Oilprice.com, in this article he outlines all of the bearish downgrades being issued on oil companies. This stripping away of equity, in a cashflow constrained environment is a company killer if they have debt to roll over.

This article from Market Watch looks at the highyield junk bond market. You can see that Energy has been the largest player since around 2005 with a whole wack of high yield debt. The article outlines the precarious nature of high-yield markets;

There’s “no question” that for energy companies with a riskier debt profile the high-yield debt market “is essentially shut down at this stage,” and there are signs that further pain could hit the sector, Heckman said.

For energy companies with weaker credit, debt spreads are around 800 basis points over Treasurys, he said.

“We are getting to the point that it is becoming very concerning, “ he said. “In the last few days we’ve seen a further selloff in energy names.”

Junk-bond expert Martin Fridson, chief investment officer at Lehmann Livian Fridson Advisors, argued that energy companies aren’t so much shut out of the high-yield market as they may be unwilling to tap it under current conditions.

He notes that around 30% of the bonds in a key junk-bond index are trading at “distressed” levels, defined as more than 1,000 basis points above U.S. Treasurys, with some sporting yields of around 20%.

The exposure level in the high yield market from the same article is here: 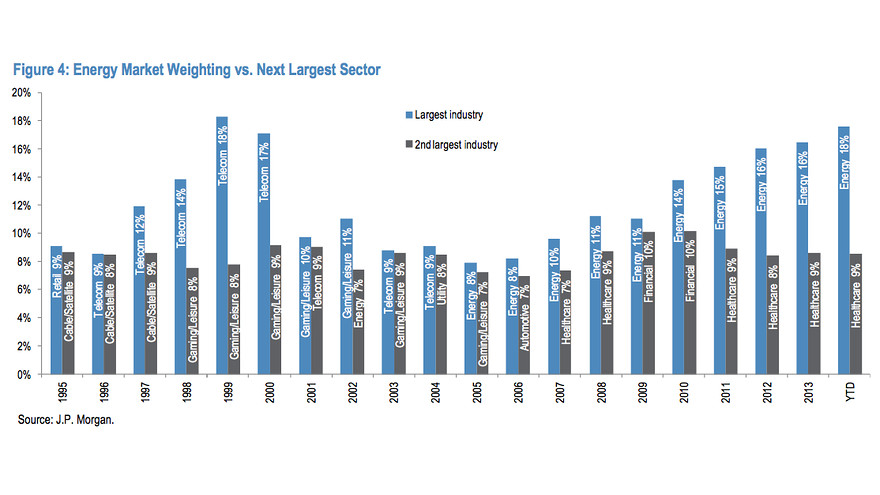 At the end of the day, it's going to be an interesting time for light tight oil. It takes money to make money is about as true as a saying gets. With high capex needed in this space to get wells producing, lots of money is needed to make lots of money.

While things aren't uniform (texas has better existing infrastructure for example). The physical properties and resulting production/decline profiles of the wells are similar across LTO and materially different from conventional oil reserves. How these characteristics aggregate to the entire play remain to be seen. Logically, or mathamatically, it looks fairly obvious. The unknown is when the tipping point will occur.

While I had been really curious to see if and when the physical charactersitics of this type of oil production would find the tipping point, this recent price collapse might just accelerate the process exogneously.

Either way, it's going to be interesting to watch and find out what happens.